Malaysia-CORRECTION Circular No 225/2012: Seminar on Contractual and Other Legal Issues in Licensing (5 Nov 2012)

CORRECTION Circular No 225/2012: Seminar on Contractual and Other Legal Issues in Licensing (5 Nov 2012)


Please note that the venue for the seminar has been changed, and is as listed below. To Members of the Malaysian Bar

On 21 Oct 2012 (Sunday), The Star published an article titled "Lawyers not up to par", concerning the Bar Council National Young Lawyers Committee's Working Conditions Forum, held at the Bar Council on 20 Oct 2012.

We have expressed our strong protest to The Star.  We have also sent a "Letter to the Editor" to The Star setting out our unequivocal position on the matter, and have asked that the letter be published in full as soon as possible.  The Star has assured us that it will do so.

We refer to the article in The Star on 21 Oct 2012 (Nation, page 6) under the title "Lawyers not up to par" regarding the Bar Council's National Young Lawyers Committee ("NYLC") Working Conditions Forum ("Forum"), held at the Bar Council on 20 Oct 2012.  The same article appeared in the online version of The Star, titled "Young ones do not meet benchmark set by employers, says Bar", at [this link][1] .

Paragraph 1: "All young Malaysian lawyers do not meet the standard international quality benchmark set by their employers, according to a Bar Council survey."

This sweeping and untrue statement was not made by any of the speakers at all at the Forum.  Paragraph 1 is also not borne out by the Bar Council's Employability Survey ("Survey") and is therefore a grave distortion of it.

While the Bar Council intends for the proposed Common Bar Course to be benchmarked against international standards (to ensure that lawyers entering into the profession will have the requisite quality), it is certainly not our position that all our young lawyers are below par.  The Star has made a very unfair generalisation that is a stain on the many good young lawyers at the Malaysian Bar.

Paragraph 3: "It found that young lawyers practising for less than seven years do not have basic attributes like English proficiency, communication and critical thinking skills . . ."

This paragraph misquotes what was said.  In his presentation, Treasurer of the Malaysian Bar, Steven Thiru, emphasised that the Survey targeted a sampling of "new entrants to the legal profession", and he explained that this group consisted of law graduates, pupils in chambers, and lawyers in their first year of practice. The survey therefore did not cover "young lawyers practising for less than seven years".

The Treasurer's statement on the decline in quality was in respect of the results from the sampling of the new entrants to the legal profession covered by the Survey, and was not directed at all "young lawyers practising for less than seven years".  The confusion on The Star's part could have been due to NYLC being a committee that focuses on the welfare of, and issues affecting, representing lawyers of seven years' standing and below.  However, even NYLC's survey on working conditions was directed at first-year lawyers and not "young lawyers practising for less than seven years".

It is also not the position of the Bar Council that all young lawyers practising for less than seven years lack the basic attributes and skills.  The Star's article paints a skewed and damaging picture of the Malaysian Bar's young lawyers.

Paragraph 14: "Thiru and other senior lawyers however, said young lawyers did not deserve the raise."

This paragraph also misquotes what was said, as Wong Fook Meng and Steven Thiru repeatedly stressed at the Forum that employers (who are able to give the raise) would be willing to give the raise for young lawyers of quality, as it would be in the employers' interest to do so, to retain talent.  It was also not the position of any of the speakers that a first-year lawyer, notwithstanding quality, did not deserve a raise in salary.

In all, it was emphasised the recommendations contained in the NYLC's survey are to serve as a non-binding guide for employer-law firms.

Across the board, The Star's article also failed to highlight the call by the NYLC's Chairperson, Richard Wee Thiam Seng, that young lawyers must equip themselves with better knowledge of the law and constantly improve standards.  At the same time, he also said that employers ought not exploit young lawyers by offering sub-standard salaries.

In its entirety, the article gave the impression that all young lawyers are incapable, and that NYLC's recommendations for better remuneration are baseless.  This was not the position taken by any of the speakers at the Forum.  To the contrary, it was the common view that the Forum was the first step towards reform in the working conditions of young lawyers, in tandem with the drive to push young lawyers to improve themselves.

We trust the above clarifies matters, and ask that The Star print this letter in full as soon as possible.
Thank you.

[1] The online version was subsequently revised and re-titled "All new entrant lawyers do not meet employers' benchmark, says Bar", but it is still erroneous and does not take into account all the points raised in this letter.  Furthermore, there is no indication in the online version that the article has been revised since initial publication.

"Lawyers not up to par": Young ones do not meet benchmark set by employers, says Bar

KUALA LUMPUR: All young Malaysian lawyers do not meet the standard international quality benchmark set by their employers, according to a Bar Council survey.

"It found that young lawyers practising for less than seven years do not have basic attributes like English proficiency, communication and critical thinking skills and commitment to the profession, which is vital for the career," said Thiru at a forum between the Bar Council and the National Young Lawyers Committee (NYLC).

He said the problem was prevalent among both local and foreign university law graduates.

Thiru placed the blame on the failure of several tertiary education institutes, which did not include practical skills with academic learning.

"So, what we get is law firm employers having to retrain young lawyers in basic practical skills that they should have learned in university," he said.

The findings come in the wake of the NYLC's recommendations to the Bar to increase the wages of young lawyers and provide more flexible working hours.

The young lawyers have been complaining that they are being paid "too little" for the amount of work they do.

The NYLC, citing its own survey, said 28.2% of young lawyers in the Klang Valley wanted to leave the profession in the next five years while another 38.7% were considering leaving.

Outside the Klang Valley, 15.3% said they would leave and another 48.2% were considering.

"Most cite low salaries and no work-life balance as the main reasons for opting out," said NYLC chairman Richard Wee.

He said most young lawyers were attracted to overseas firms offering better benefits.

Thiru and other senior lawyers however, said young lawyers did not deserve the raise.

"They fail to realise that they should be working to learn and better themselves as lawyers, rather than focus on the cash.

"There are no shortcuts, young lawyers must create value and contribute meaningfully to their firms to justify higher compensation," said Wong, who is a member of the Bar Council's Constitutional Law Committee and former NYLC deputy chairman. 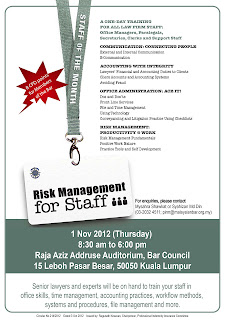 Malaysia-Talk:'Law on Legacies and Inheritance for Muslims and Non Muslims:the Islamic Perspective for Takaful & Insurance Industry'

Date: 22 October 2012 10:34
Subject: Talk:'Law on Legacies and Inheritance for Muslims and Non Muslims:the Islamic Perspective for Takaful & Insurance Industry'
To:

Malaysia-Closure of registration for the Talk on 9.11.2012

Dear Members and Chambering Pupils,
Kindly note that all the seats for the Talk on "Basic Conveyancing Practice-Procedural & Substantive Laws, Rules And Regulations" on 9th November, 2012 (Friday) have been allocated to participants who have registered and paid for the same.
As such, we will not be accepting any new registrations for the aforesaid Talk.
Kindly call secretariat @ 03-55196219 for clarification.
Thank you
Secretariat,
Selangor Bar Committee.

Malaysia-Invitation to ROC Seminar "Understanding The Rules Of Court: The Change and Effect" on 8th November 2012

Subject: Invitation to ROC Seminar "Understanding The Rules Of Court: The Change and Effect" on 8th November 2012


Early Bird Promotion will be ended before this Friday.
Limited seats are available now!!!!!
8 CPD points earning Seminar
Key Note Speaker: YBhg Dato' Seri Gopal Sri Ram
Good day to you,
It is a great pride and pleasure for us to invite Sir/ Madam and your legal advisor  to attend a ROC Seminar  to be held at the Crystal Crown Hotel (PJ) on 8th November 2012 at 8.30am - 5.00pm.

The theme of the Seminar is .Participants can benefit from the expertise of some of the leading legal fraternity in understanding the application and effect of the new Rules. It helps to discover best practice insights that will make you a stronger professional and provide your firm a competitive advantage.'Understanding The Rules Of Court: The Change and Effect'


We encourage your company to take advantage of this promotion and sign up to attend at the special offer and save up to 17% off normal price .To sign up please return the enclosed registration form with company stamp and signature before the early bird offer ends .25 October 2012

We look forward to receive your confirmation of attendance in the near future.