"...[11] Clause 22(2) provided that if the appellant fails to comply with clause 22(1) then the appellant shall pay immediately to the respondents liquidated damages to be calculated day to day at the rate of 10% per annum of the purchase price. Once the date for delivery of vacant possession had passed, the appellant's liability to pay liquidated damages calculated in accordance with the formula prescribed by the SPA became immediate. There was no further onus on the respondents to prove damages. Gopal Sri Ram JCA (as he then was) said as follows in Sentul Raya Sdn Bhd v. Hariram Jayaram & Ors and other appeals [2008] 4 CLJ 618 :
On its proper construction, the clause makes a housing developer immediately liable to a purchaser in liquidated damages once the date for completion passes. Put differently, cl. 22(2) excludes the operation of s. 56(3)..."
at September 11, 2012

"It is trite law that contracting parties cannot contract out of a statutory provision in order to avoid compliance with the statutory requirements. Such agreement would be void as being contrary to public policy: Kimlin Housing Development Sdn Bhd (Appointed receiver and manager) (in liquidation) v Bank Bumiputra (M) Bhd & Ors [1997] 2 MLJ 805 SC..."
at September 11, 2012

This is an advertisement. If you would like to know more about Bar Council's advertising options, please contact us by email at advertise@malaysianbar.org.my.

Malaysia-Striking out and data protection

Subject: Striking out and data protection

Good day to you,
It's great pride and pleasure to share with you our employment law books:
1. Striking Out
Author: Nasser Hamid 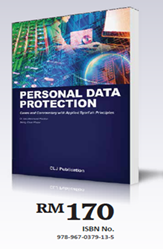 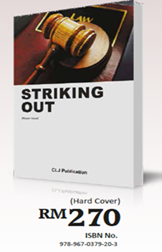 **Disclaimer**
This email is a copyright of MCLJ SDN BHD and may contain confidential information. If you are not the addressed recipient please delete all copies of this email and notify MCLJ SDN BHD. For full disclaimer please contact disclaimer@cljlaw.com

Malaysia-Whether a partnership would qualify as an unregistered company pursuant to Section314 of the Companies Act, 1965

"[31] We are of the view that that s. 314(1) of the Act is clear and unambiguous. As such it must be given its literal interpretation. Under the circumstances it is not the function of the Court to re-write the statute in a way in which it considers reasonable. In other words, the High Court was not entitled to read words into that provision. Where the words of the statute are plain and unambiguous, the Court ought to give effect to its plain meaning (see Duport Steel Ltd v Sirs [1980] 1 W.L.R. 142; MBF Holdings Bhd v Emtex Corporation Bhd [1986] 1 MLJ 477). In Vickers. Sons and Maxim, Ltd v Evans [1910] AC 444, which was referred to by the Court of Appeal in United Overseas Bank (Malaysia) Sdn Bhd v UJA Sdn Bhd & Another Appeal [2010] 6 CLJ 204 at p 208, Lord Loreburn, LC said:
My Lords, this appeal may serve to remind us of a truth sometimes forgotten, that this House sitting judicially does not sit for the purpose of hearing appeals against Acts of Parliament, or of providing by judicial construction what ought to be in an Act, but simply of construing what the Act says. We are considering here not what the Act ought to have said, but what it does say;  The appellants' contention involves reading words into this clause. The clause does not contain them; and we are not entitled to read words into an Act of Parliament unless clear reason for it is to be found within the four corners of the Act itself.

(i)          a foreign company; and
(ii)         any partnership, association or company consisting of more than five members,
but does not include a company incorporated under the Act or under any corresponding previous written law.
[33] It is therefore our unanimous view that the words "a foreign company and any partnership, association or company consisting of more than 5 members" in s. 314 (1) of the Act ought to be read disjunctively. It is clear that the word "foreign" qualifies only the word "company'. In our view it is not correct to read the word "foreign" before the word "partnership" in construing that provision. The word "foreign" does not qualify the word "partnership". That is the plain meaning of that provision."
at September 11, 2012