The Malaysian Bar welcomes the Honourable Attorney General's recent announcement that the Attorney General's Chambers ("AGC") is considering proposing an amendment to the Dangerous Drugs Act 1952 to give Judges the discretion not to impose the death sentence on drug couriers.  The AGC is reportedly also considering a proposal that those on death row be resentenced.
This is a positive first step towards realising the cross-party initiative, led by the Minister in charge of Law and Parliamentary Affairs, to end the use of the mandatory death penalty for drugs-related offences.  There is great wisdom in leaving the decision on punishment for such offences to the discretion of the Judiciary.
The next step must be a moratorium on the use of the death penalty, which must ultimately culminate in the abolition of the penalty, as the execution of human beings by the State serves as an "example of barbarity" to society and legitimises the taking of human life.

This goal will earn Malaysia a rightful place amongst modern and progressive democracies, as the worldwide trend has been to abolish the death penalty.

Malaysia-A World Where Every Man, Woman and Child Live Under the Rule of Law | International Malaysia Law Conference (26 to 28 Sept 2012)

A World Where Every Man, Woman and Child Live Under the Rule of Law | International Malaysia Law Conference (26 to 28 Sept 2012) 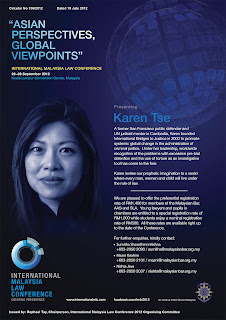 International Malaysia Law Conference ("IMLC") 2012 will be held at the Kuala Lumpur Convention Centre from 26 to 28 Sept 2012.

For Members of the Bar, the registration fee is RM1,400 per person.

A group discount of 10% is available when five or more lawyers from the same law firm register simultaneously for IMLC 2012.

For more information on IMLC 2012:

(a) View the programme highlights here;
(b) Click here for the registration form; and
(c) Click here and here to view two short videos on IMLC 2012.