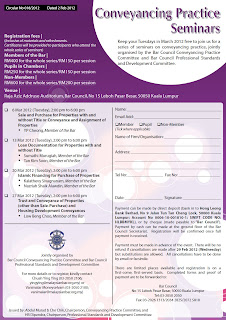 Malaysia-Press Release: Desecration of Orang Asli graves is another blow to the ancestral land rights of the Orang Laut of Seletar

Press Release: Desecration of Orang Asli graves is another blow to the ancestral land rights of the Orang Laut of Seletar

Desecration of Orang Asli graves is another blow to the ancestral land rights of the Orang Laut of Seletar
The Malaysian Bar is concerned by the recent reports of desecration of two Orang Laut of Seletar burial sites, in Kampung Bakar Batu and Kampung Sungai Tenom, near Johor Bahru.  These sites are located within the Iskandar Malaysia development area, which is under the purview of the Iskandar Regional Development Authority ("IRDA"), a Malaysian Government statutory body.  This is yet another blow to the ancestral land rights of, and respect for, the Orang Asli.

As a traditional fishing community, the Orang Laut of Seletar have historically occupied the coastal mangrove areas of Johore as their ancestral lands.  This area is the subject of continuing encroachment by the Johore state government and occupation by entities, including IRDA, as it is now prime land amidst rapid development.  Through the years, the Orang Laut have consistently maintained that the areas they occupy and forage (both on land and sea) are customary ancestral areas.  The authorities have paid scant regard to their claims.  As such, these Orang Laut have lost much of their land and their livelihood has been seriously diminished, if not completely wiped out, through decimation of the mangrove swamps and pollution of the coastal seas.  Many of these Orang Laut live in abject poverty amidst thriving development on their lands, from which they do not benefit.  Government agencies like the Jabatan Kemajuan Orang Asli have failed the Orang Laut of Seletar.

In the days leading up to Chinese New Year, a sizeable area of burial grounds shared by the Orang Laut of Seletar communities of Kampung Bakar Batu and Kampung Sungai Temon, were reported to have been desecrated and destroyed by contractors purportedly under the purview of IRDA.  Police reports were quickly lodged, appeals were sent to the Malaysian Human Rights Commission ("SUHAKAM"), and work has been temporarily halted.

The Orang Asli, like any other community in Malaysia, are important members of our society.  Their numbers may not be large, but they represent a heritage-rich link with the early peoples of Peninsular Malaysia which, once destroyed, would be lost forever.  It is incumbent upon the Malaysian Government to protect and safeguard their way of life.  Development goals for Iskandar Malaysia must be carried out in a socially-sustainable and caring manner, and with the utmost respect for the rights of the Orang Asli.  These are principles that the Malaysian Government agreed to when it voted in favour of the United Nations Declaration on the Rights of Indigenous Peoples ("UNDRIP") in 2007.  The Malaysian Government also voted in favour of the concept of "free, prior and informed consent" of the indigenous peoples on any policies or projects that may affect their livelihood.

For the Orang Laut of Seletar who live within Iskandar Malaysia, there was every reason for them to expect a new model of governance in respect of Orang Asli rights over customary areas.  The Prime Minister himself said, in his capacity as Co-Chairperson of IRDA, "The development in Iskandar Malaysia is geared towards being inclusive and sustainable, providing a multitude of prospects for growth and prosperity to be enjoyed by all stakeholders."[1]   The Malaysian Bar urges the Prime Minister and the Malaysian Government to do the honourable thing and give effect to the UNDRIP principles and the words in this quote, in a real and meaningful way.
Indeed, the incidents involving Kampung Bakar Batu and Kampung Sungai Temon are by no means isolated affairs.  There appears to be a systemic pattern of rampant encroachment of Orang Asli-occupied areas throughout Malaysia, both in the peninsula as well as in Sabah and Sarawak.  The continuous violation of the land rights of the Orang Asli is a breach of their fundamental liberties.  It has to stop.
The Malaysian Bar calls upon the federal and state governments to immediately observe a moratorium on proposed development on lands and other areas claimed by indigenous peoples, pending the completion of the National Inquiry into the Land Rights of Indigenous Peoples in Malaysia currently being undertaken by SUHAKAM.  Once its report is ready by September 2012, the full scale of the issue can be properly understood and appropriately addressed, in an inclusive, and environmentally- and socially-sustainable, manner.
The Malaysian Bar will continue to support Orang Asli communities by holding various programmes geared towards legal empowerment.  We have called for lawyers to provide pro bono services to the Orang Asli, and are actively advocating for their voices to be heard.  We have also launched a defence fund to assist in defraying the costs of litigation, where necessary.

We strongly urge the Malaysian Government to join us in preserving the way of life of the Orang Asli as a living national treasure and civilisational heritage.