Can a winding-up order be set aside or rescinded?

"...[17] On the jurisdictional issue, this court is of the view that the learned judge of the KL-D8 court clearly has no jurisdiction to set aside or rescind a winding up order earlier made and perfected by another High Court, in this case the Ipoh High Court on 21 June 2007. The KL-D8 Court had already been functus officio and the matter is res judicata. Even if the decision of the Ipoh High Court in granting the winding up order is wrong, it should have been dealt with by the Court of Appeal (on appeal by the respondent), but not to be set aside or rescinded by another High Court of concurrent jurisdiction.
[18] The above principle was stressed by the Court of Appeal in Vijayalakshimi Devi d/o Nadchatiram v Jegadevan s/o Nadchatiram & Ors [1995] 1 MLJ 830.
[19] The Companies Act 1965 or the Companies (Winding-Up) Rules 1972 make no express provision enabling the High Court to set aside or rescind a winding up order after it had been made and perfected. The scheme of the Act is such that an aggrieved party may under s 253 of the Act appeal against a winding up order, or apply to stay to proceedings under s 243 of the Act altogether or for a limited time, under terms and conditions which the court thinks fit (see Perdana Merchant Bankers Bhd v Maril Rionebel (M) Sdn Bhd [1996] 4 MLJ 343; and Sri Hartamas Development Sdn Bhd v MBf Finance Bhd [1991] 3 MLJ 325).
[20] In this respect, the court is in agreement with the learned author Derek French in his book Applications To Wind Up Companies -- (2nd Ed) at p 289 para 4.4.3 when he says:

A winding-up order is a final order. In subsequent proceedings in the winding-up, the Court will not consider whether the order was properly made; that can be considered only on an appeal against the order.

Can there be more than 1 winding-up petition against the same respondent company?

[27] The above proposition was adopted and followed by Dulat J in Ladli Prasad Jaiswal v Karnal Distillery Co Ld (1954) Comp Cas 77, where he held:
It is not shown that this view has been departed from in the English Courts. There is thus no authority for concluding that the appellant's petition for the winding-up of this company is not maintainable because a previous petition by him of a similar kind is pending and has not yet been decided.

[28] The above principle was accepted and followed by the Court of Appeal in Maril-Rionebel (M) Sdn Bhd & Anor v Perdana Merchant Bankers Bhd and other appeals [2001] 4 MLJ 187; [2001] 3 AMR 2893, where it was held by Gopal Sri Ram JCA, inter alia, that:
I require no clearer authority for the proposition that more than one winding up petition may be presented against a company. Of course, the provision of r 33 is available to a petitioning creditor. And if he does not take advantage of the rule to have him substituted for a lethargic petitioner, he may find himself out of pocket for his costs. But on no account is his petition bad in law. Nor is it an abuse of the court's process.

[29] The above authorities clearly support the findings of this court that the Ipoh High Court winding up petition filed on 5 January 2007 is valid in law, even though at the time of filing there was another winding up petition earlier filed and pending in the KL-D2 High Court. No leave is required for such filing under s 226(3) of the Companies Act 1963...".

What is the legal effect of a stay of a winding-up order?

[34] The same principle was laid down in the case of Krextile Holdings Pty Ltd v Widdows (1974) VR 689, in that the order of a stay of the winding up, if expressed in unlimited terms (as in the present case), would put an end to the winding up process and the respondent company can thereupon resume the conduct of its business and affairs as if no winding up existed at all. If proceedings in the winding up are stayed by order of the court, any duty of the official receiver to send report ceases (see Halsbury's Laws of England (4th Ed Reissue) para 1528)...".

"...[35] Now, the question is: can the Ipoh High Court make a winding up order against the respondent after the KL-D2 winding up order was stayed wholly?
[36] The above authorities are clear indicators that the answer to the above question is in the affirmative. The Court of Appeal's decisions in Vijayalakshmi Devi d/o Nadchatiram v Dr Mahadevan s/o Nadchatiram  and Maril-Rionebel (M) Sdn Bhd  are very clear on this issue and are binding on the High Court. The learned High Court judge (KL-D8) should have followed those decisions.

CONCLUSION
[37] The above consideration leads the court to only one conclusion ie the decision of the Kuala Lumpur High Court (KL-D8) on 17 January 2008 ought to be reversed because the learned judge has failed to appreciate the legal effect of the stay order in the D2 petition granted by the KL-D2 Court, which totally terminated the winding up order against the respondent. Consequently the Ipoh High Court Winding Up Order on 21 June 2007 was correctly granted and valid in law....".
at September 27, 2011 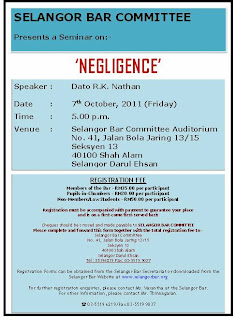