The Malaysian Bar will host its signature event – the International Malaysia Law Conference 2012 ("IMLC 2012") – at the Kuala Lumpur Convention Centre, a year from now!  Aptly themed "Asian Perspectives, Global Viewpoints", this next conference will explore the impact of law on business, society and government, through keynote addresses, plenary sessions and inspirational talks featuring globally-renowned speakers.

Previously known as the "Malaysian Law Conference", the series was inaugurated and declared open by the then-Prime Minister of Malaysia, Tun Abdul Razak Hussein, on 15 July 1973.  Since then, with the rapid advancement of the Malaysian economy and the meteoric rise of Asia, the Malaysian Law Conference has evolved to keep up with the times.  The change in the name of the event echoes the era of increasing globalisation.  Armed with the tagline and brand promise of "Creating Precedence", through IMLC the Malaysian Bar will demonstrate how it aims to be continually relevant and competitive, to be at the frontier for reform of global and local legislation, as well as to expand the breadth and depth of the Asian legal landscape.

We recognise global trends brought about by globalisation.  Among these trends is the rise – sometimes irrespective of local or national boundaries – of global cities.   Such cities will be the engine of future growth.  In this respect, we value and support the strategic position and role of Kuala Lumpur in Asia.

We recognise the increasing approximation and convergence of commercial laws.  It is our hope to work with the government and its related agencies to bring about a radical change that is responsive to global trends, in order to stimulate innovation and economic activity, which are critical components for the future success of a society.

Thomas Friedman, the author of best-selling books "The Lexus and the Olive Tree" and "The World is Flat" introduced the concept of "the flattening of the globe".  He argued that because of technological and other breakthroughs, individuals around the world can communicate, collaborate, and compete with one another, thus heightening the competitive environment.  In response to such an environment, three core values have emerged in IMLC 2012.

1) Innovation – The Malaysian Bar wishes to dispel the notion that lawyers are traditional, unimaginative and overly studious, when, in reality, they are creative, adaptable and multidisciplinary.  We believe that conscious effort, and even sacrifice, is required for innovation, and to push forward and be the front for global change.  We aim to support individuals and corporations who are willing to take calculated risks, not compromise on their vision, and not conform to any conventional yardstick that would limit the power of their own imagination.

2) Immersion – Through IMLC 2012, the Malaysian Bar aims to provide an immersive method of learning and creating ideas.  In this context, legal consultants, judges, business representatives and experts in various other fields can come together to discuss and provide valuable feedback and critical evaluations to expand the collective understanding of the evolving legal landscape in all fields. We believe that by putting ourselves in others' shoes, we will be able to connect ideas, cover blind spots and appreciate the full scope of the value of law.

3) Inspiration – The Malaysian Bar aspires to restore passion in the legal world, to give insight into how significant even minute jobs can be.  We hope to motivate and illuminate people to use self-recognised opportunities to identify needs before they even appear, and to respond accordingly to bring about the required change.  We believe that this awareness should also be bestowed on society in general, extending the scope of law further to create a more well-informed and legally-sensitive globalised community.

IMLC 2012 is a conference that reflects the realities of a globalised world, where connections are made not in silos but with a cast of prominent role models, corporate leaders, businesspersons, entrepreneurs and thought leaders, each displaying its own discipline.
Apart from employing an inclusive approach, IMLC 2012 will provide a platform to mobilise plans and ideas into actions, by creating an intellectually-stimulating environment that inspires creativity to flourish.  It will also provide a neutral, safe and non-threatening platform for discussions, debates and deliberation to thrive.  These elements will permit a positive change of mindset, even a paradigm shift that would be welcomed, for an open society is a prerequisite in any meaningful transformation.

We anticipate that IMLC 2012 will draw numerous foreign delegates, who will make up 30 to 40 percent of the total participants.  In conjunction with the conference, an arts festival entitled "Fundamental Freedoms Fringe Fest", and an exhibition entitled "Anything Legal", will be held, both of which will be open to the public.
The launch of IMLC 2012's logo and website today marks the beginning of another chapter in the history of the Malaysian Bar.  IMLC 2012's logo consists of a segmented circle with gradients of shades of blue. The breaking sections of the circle represent how the law impacts, and is affected by, three large sectors: government, economy and society.  The emblem symbolises a congregation of minds and sharing of ideas in one fluid and environment.

For more information on IMLC 2012, please refer to www.internationalmlc.com.


--
To add or change your e-mail address, please fax (and not via email) your new email address under your firm's letterhead to the Bar Secretariat at +603-20261313.

This message was sent from a notification-only email address that does not accept incoming email. Please do not reply to it. Thank you.

To all Members of the Malaysian Bar
Save the Date (26 Sept 2011):
"Arbitral Institutions in CAFTA Region – Opportunities and Challenges" Session
Bar Council Malaysia, together with China Law Society, the ASEAN Law Association of Malaysia and the Kuala Lumpur Regional Centre for Arbitration ("KLRCA"), are jointly hosting the 5th China-ASEAN Forum on Legal Cooperation and Development in Kuala Lumpur, Malaysia, on 26 and 27 Sept 2011.
Session 2, titled "Arbitral Institutions in CAFTA Region – Opportunities and Challenges", will be held at 12:00 pm to 1:15 pm, on 26 Sept 2011 (Monday).  The session will be moderated by Yang Ing Loong, Partner and Global Coordinator of International Arbitration, Sidley Austin LLP, Hong Kong.  The panellists for the session are:

The profiles of the speakers and moderator follow below.

Sundra Rajoo is the Director of KLRCA.  He was recently appointed as President of the Asia Pacific Regional Arbitration Group ("APRAG"), a federation of over 30 arbitral institutions in the Asia Pacific region.  A Chartered Arbitrator and non-practising advocate and solicitor of the High Court of Malaya, he had earlier practised as an Architect and Town Planner.
He has been appointed as chairman, co-arbitrator of three-man panels and sole arbitrator in international and domestic arbitrations.  He serves on the panel of numerous international arbitral institutions and organisations, and is also a Fellow of the Chartered Institute of Arbitrators ("CIArb"), Malaysian Institute of Arbitrators ("MIArb"), Singapore Institute of Arbitrators ("SIArb") and Indian Council of Arbitration ("ICA").
Sundra Rajoo has also authored several books on arbitration and contract law, including "Law, Practice and Procedure of Arbitration" (2003), "The Malaysian Standard Form of Building Contract (The PAM 1998 Form)" (1999), and the Arbitration title for Halsbury's "Laws of Malaysia" (2002).  He was also the co-author of "Arbitration Act 2005 – UNCITRAL Model Law as Applied in Malaysia" (2007) and "The PAM 2006 Form" (2010).

Tony Budidjaja is the founder and Principal/Managing Partner of Budidjaja & Associates.  He has extensive knowledge and approximately 15 years of experience in all aspects of Indonesian commercial law.
He has been identified by the "Asialaw Leading Lawyers" survey for five consecutive years since 2006 as one of the most highly-acclaimed legal experts in dispute resolutions in the Asia Pacific region.  Other recent surveys, such as "Global Law Expert" and "Corporate International Magazine", have recognised him as one of the leading Indonesian experts in business competition and international trade.
Tony Budidjaja has written a number of books, articles and columns.  He has also been a presenter and speaker at numerous seminars, workshops and courses on a wide range of subjects, especially on business reorganisation, corporate litigation, arbitration, mediation and alternative dispute resolution.

This session will be moderated by Yang Ing Loong, Partner and Global Coordinator of International Arbitration, Sidley Austin LLP, Hong Kong.  Prior to his relocation to Hong Kong, he was a partner in the firm's Singapore office – he currently still oversees the dispute resolution team there.  Yang Ing Loong's practice focuses on arbitration and litigation in Asia, particularly on disputes concerning Greater China.
A qualified arbitrator and accredited mediator, he has extensive experience acting for corporate clients in international arbitrations, complex commercial litigation, shareholders' disputes, joint venture and technology licensing disputes, Foreign Corrupt Practices Act ("FCPA") investigation and compliance, and regulatory issues.  Yang Ing Loong also sits as arbitrator in arbitrations under the rules of China International Economic and Trade Commission ("CIETAC"), Singapore International Arbitration Centre ("SIAC"), ICC and Hong Kong International Arbitration Centre ("HKIAC").  He is on the panel of CIETAC, BAC, SIAC, HKIAC and KLRCA.
Before joining Sidley Austin LLP, Yang Ing Loong was the Chief Representative and Head of Dispute Resolution for the Beijing Office of a premier US law firm, where he focused on China-related international arbitration.  Yang Ing Loong travels extensively within China and the region to work with clients, and has been recommended in "Asia Pacific Legal 500" as a leading dispute resolution lawyer in China.  He is also recognised in "PLC Which Lawyer's Dispute Resolution Handbook" as a "highly recommended" dispute resolution lawyer in China.
Yang Ing Loong was awarded a prestigious Singapore Government Scholarship to read law at Cambridge University.  Upon his return to Singapore, he served as a State Counsel and Deputy Public Prosecutor in the Singapore Attorney-General's Chambers for five years before joining private practice.  During his tenure, he was involved in the prosecutions of many high-profile cases.  While in private practice in Singapore, Yang Ing Loong was a litigation partner in two of Singapore's top law firms and appeared as Counsel in many complex trials and appeals, both civil and criminal, in the High Court and the Court of Appeal of Singapore.  Yang Ing Loong is admitted in England and Wales, Hong Kong, New York and Singapore.
Do not miss this opportunity to hear them speak at the 5th China-ASEAN Forum on Legal Cooperation and Development!  The line-up of luminaries at the Forum include YAA Tan Sri Arifin Zakaria, Chief Justice of the Federal Court of Malaysia; YABhg Tun Dato' Seri Zaki b Tun Azmi, President of ASEAN Law Association; the Honorable Renato C Corona, Chief Justice of the Supreme Court of the Philippines; Professor Wu Zhipan, Executive Vice-President of Peking University; YBhg Tan Sri Yong Poh Kon, Managing Director of Royal Selangor International Sdn Bhd; and many more!
Attached please find the programme of the Forum.  For more information, please refer to the official website of the Forum at www.cafta2011.com.  To register, kindly complete and submit the attached registration form by fax to 03-2032 2043 or 2026 1313; or by email to janet@malaysianbar.org.my.  Online registration is also available.
Please contact Janet Nathan, China-ASEAN Free Trade Area ("CAFTA") 2011 Organising Committee Officer, by telephone at 03-2050 2103, or by email at janet@malaysianbar.org.my, should you have any queries.
Thank you. 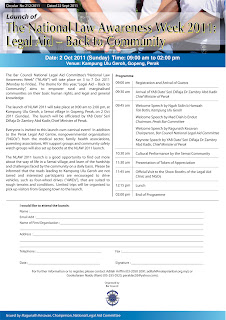 We would like to extend our invitation to you to attend our upcoming Seminar / Exhibition of a waterside development in Sydney, Australia.

Take this opportunity to invest in Sydney without having to pay Stamp Duty and having the priority to select premium units. VQ: Harbour Views is located in Rhodes, about 15km from the CBD and 3 mins walk to the train station. It is close to the Sydney Olympic Park and is part of the last parcel of development land in the area.

Reserve your seats for the Seminar or call us immediately to make an appointment! 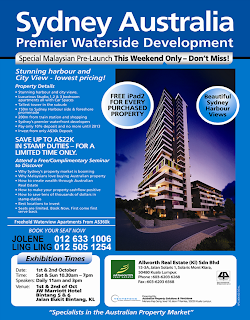