Press Release: Home Minister must walk the PM’s talk in respect of refugee deal with Australia

Press Release
Home Minister must walk the PM's talk in respect of refugee deal with Australia
The details of the proposed agreement between the governments of Malaysia and Australia with respect to the processing in Malaysia of 800 irregular maritime arrivals ("IMAs") apprehended by the Australian authorities remain shrouded in secrecy. In an era of openness, transparency and accountability, this does not bode well.

As things stand, the Malaysian Bar remains opposed to the idea in principle, since Malaysia is not a signatory to the 1951 Convention on the Status of Refugees, or its 1967 Protocol. However, it has been brought to our attention that the Division of International Protection of the Office of the United Nations High Commissioner for Refugees ("UNHCR") issued a position paper in November 2010 entitled "Maritime interception operations and the processing of international protection claims: legal standards and policy considerations with respect to extraterritorial processing" [fn1].
The paper outlines UNHCR's views on extraterritorial processing of claims for international protection made by persons who are intercepted at sea. It provides an overview of the applicable standards under international human rights and refugee law as well as key policy parameters for extraterritorial processing from the perspective of UNHCR. There is also a related 10-point plan [fn2]. We believe that the agreement between the governments of Malaysia and Australia will rely in part on this policy paper and the 10-point plan.
However, based on our reading of this policy paper, Malaysia still falls far short of the standards to be expected of a country entering into an extraterritorial processing arrangement. Formalised reception arrangements do not exist in Malaysia, except for the presence of immigration detention centres. Informal reception arrangements practised in Malaysia do not address the basic needs of new arrivals and provide for a stay consistent with the right to an adequate standard of living. There are no provisions of adequate security, freedom of movement, and opportunities for self-reliance under such circumstances. Legal guarantees of access to education and work do not exist, and access to health care remains prohibitively expensive.

The paper specifically states that any transfer of responsibility for processing asylum claims made by intercepted persons from an intercepting state to another country is subject to appropriate protection safeguards. Thus any agreement between Malaysia and Australia must guarantee Malaysia's respect for international standards of treatment and procedural and substantive rights for refugees and asylum seekers. The Malaysian Bar insists that such guarantees should apply to ALL refugees and asylum seekers in Malaysia, and not just to the chosen 800 IMAs. To do otherwise would be to breach the specific statement that the 800 IMAs are not to enjoy any preferential treatment.

How do we move forward? Malaysia needs to build its credibility in the area of refugee management from the ground up. In order to do so, the Malaysian Bar calls on the Malaysian Government to include Bar Council and local civil society organisations ("CSOs") involved in refugee work to take part in the negotiations with the Australian Government.

On 7 May 2011, our Prime Minister Dato' Sri Mohd Najib Tun Abdul Razak addressed a meeting with Association of Southeast Asian Nations ("ASEAN") CSOs in Jakarta, as part of the 18th ASEAN Summit. Our national news agency Bernama reported on 8 May 2011 as follows:

Urging the organisations to enhance cooperation with the Asean governments, [Datuk Seri Najib] said CSOs could provide good feedback to the governments on civil society matters. In a closer cooperation, they should also act as partners to the Asean governments in solving various issues and enhance their participation at the regional level rather than focus only at the national level. "CSOs are responsible for not only addressing regional society issues but also are responsible for socialising well and sound values to the community. Right now, the era of government knows best and the government knows all is over. CSOs need to provide feedback for policy makers and become frontliners in a race to find solutions for the community," he said.
Bar Council and numerous CSOs are involved in assisting refugees and asylum seekers in Malaysia. Several CSOs are operational and implementing partners of UNHCR in Malaysia, providing educational, health and social services and logistical support to refugee communities. Given that the Malaysian Government will delegate to UNHCR most of the work of determining the refugee status of the 800 IMAs who will be sent to Malaysia under the proposed agreement, the participation of Bar Council and these CSOs will help build credibility in the Malaysian Government. They have the requisite on-the-ground experience and expertise, and are fully aware of the challenging circumstances that refugees and asylum seekers face in Malaysia. They have the knowledge and ability to help make the agreement work.

If the Malaysian Government is serious about the refugee problem in Malaysia, it should, in conjunction with the negotiation of this agreement, announce that whatever international standards agreed with the Australian Government will immediately apply to all refugees and asylum seekers in Malaysia. It should also concurrently announce a timetable for accession to the 1951 Convention on the Status of Refugees and the 1967 Protocol.

As the PM has said, "the era of government knows best and the government knows all is over." The Malaysian Bar calls upon the Minister of Home Affairs to abide by the words of the Prime Minister. The Malaysian Government must show its sincere commitment to private-public partnerships not just in the areas of the economy and public works, but equally critically in the area of the promotion and protection of human rights for all, including ALL refugees and asylum seekers.

Talk on 'Law on Legacies Inheritance for Muslim & Non Muslim: The Islamic Perspective' 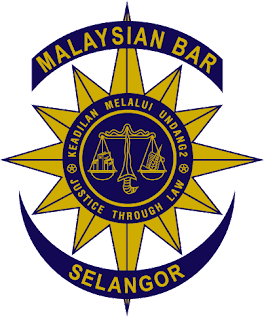 Dear Members of the Bar,

The Selangor Bar Committee is organising a Talk on 'Law on Legacies Inheritance for Muslim & Non Muslim: The Islamic Perspective' on 10th June, 2011 [Friday], 5.00 p.m at Selangor Bar Auditorium.