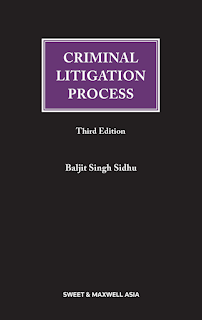 Written by and experienced criminal law practitioner, this book contains a wealth of knowledge that sheds light on the technicalities of the criminal litigation process in Malaysia. The text is presented in a lucid and readable manner and contains significant recent court decisions and new legislative developments.
The key new areas covered in this new edition include: 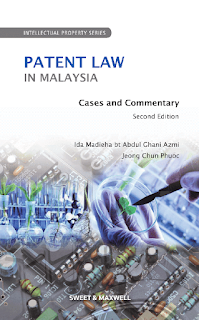 Print
RM 350.00
This book provides a full and authoritative analysis of cases, both local and international, on issues concerning patents, as well as a thorough review of important recent developments in the field of patent law.
Structured in 12 chapters, the book is complete with essential and analytical information on patent law. Each topic is introduced by a helpful overview before key cases are presented. These local and international cases on patent law have been carefully selected and are complemented by copious commentaries to elucidate on the wide range of issues that arise. The commentaries which are enlightening, thought-provoking and insightful, assist the reader to have an in-depth and critical understanding of patent law. 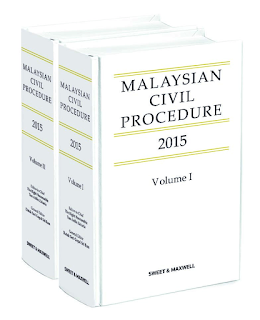 Must-have one-stop court litigation reference for civil litigators
"Malaysia Civil Procedure 2013 brings together the invaluable knowledge and practical insights of the Malaysian legal community on civil procedure in Malaysia. The commentary is authoritative and comprehensive and may be referred to with confidence during the conduct of civil litigation in the Malaysian courts."
Tun Arifin Zakaria, Chief Justice of Malaysia (Foreword to the 2013 Edition)
Drawing on the pedigree of the White Book which has seen numerous successful local editions in various common law jurisdictions, Malaysian Civil Procedure 2015 provides you with the most current knowledge, information, practical insights and confidence to succeed in all areas of civil court work.
Expanded to two volumes, it now contains fully up-to-date text of key legislation essential to civil litigation, with annotations to theRules of the Federal Court 1995, the Rules of the Court of Appeal 1994 and the Courts of Judicature Act 1964. New court practice directions plus previously unpublished practice directions from Sabah & Sarawak makes this the most comprehensive civil litigation reference.
Key Features:
·         Insightful order-by-order commentary presented clearly with succinct headings
·         Exacting quality and accuracy in true White Book tradition
·         Comprehensive survey of key local and relevant foreign case law
·         Contributors drawn from the judiciary, leading law firms and academia
·         Reviewed by experienced panel of reviewers 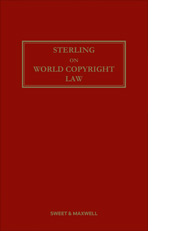 PRODUCT DESCRIPTION
World Copyright Law is renowned for its incisive coverage of this complex and wide-ranging subject, providing you with a single reliable source to help reinforce or defend any action for copyright infringement.
This title gives you a complete overview of world copyright law in, focusing on the key subjects of current national interest. It offers in-depth analysis and commentary provided by a distinguished authority in the field, drawing on contributions from a cross-jurisdictional team of experts.
NEW FOR THIS EDITION

Sale of Ships guides solicitors and barristers through the use of the Norwegian Saleform in the context of English contract law, covering legislation such as UCTA 1977 and the Sale of Goods Act. The 1993 Nipponsale form is also analysed in depth and in comparison with other saleforms.
The new edition features clause by clause guidance on each provision and it also includes appendix materials, international materials and pro forma list of delivery documents.
FEATURES

This easy to use, "how-to" guide for the general practitioner shows how to use declarations of trusts to protect clients' interests. It deals with all situations where a declaration of trust can be used – such as property purchases, wills, insurance policies and company shareholdings – giving step-by-step drafting guidance.
Declarations of Trust:
HIGHLIGHTS COVERED IN THIS NEW EDITION:


Frequently cited in court, Lewin on Trusts covers the entire law of trusts from general principles to current practice, ensuring you have all the information you need on the effective creation of trusts and the resolution of disputes and other problems that arise. LEWIN ON TRUSTS:
HIGHLIGHTS COVERED IN THIS NEW EDITION:
The 1st supplement brings the 19th Edition up-to-date with the most recent case law and legisltion.
SUPPLEMENT COVERAGE:

Gatley on Libel and Slander

The 1st Supplement to the 12th Edition will include all the latest developments in libel and slander, malicious falsehood and privacy from here and overseas including full updates on all developments in defamation case law, both substantive and procedural, including analysis of the effect on English law and practice of the Defamation Act 2013, and in particular:

Chitty on Contracts is the pre-eminent reference work on contract law in the common law world. It has been used for generations by lawyers as the leading guide to contracts, and is relied on to provide insight and aid in complex areas of the law.
Volume One covers the General Principles of contract law, while Volume Two offers guidance on specific contracts, namely contractual issues in specific industry sectors.

Injunctions is a concise and practical guide to the subject of injunctions, with particular emphasis on procedure. The decision to grant or refuse an interim injunction will often be determinative of the whole dispute. Injunctions:
This 12th Edition includes essential updates on:

Assisting you each step of the way, Snell's Equity provides in-depth commentary and analysis of the law of equity and offers interpretation of how the different rules can be applied to property.
SNELL'S EQUITY:
HIGHLIGHTS OF THIS NEW EDITION:
The first supplement brings the 33rd edition up-to-date with the most recent case law and legislation.
Wilkinson's Road Traffic Offences

PRICE:RM 2,210.00
​
Wilkinson's Road Traffic Offences is the definitive guide to road traffic law.
As the definitive authority on road traffic offences in England and Wales Wilkinson's Road Traffic Offences is the go-to guide covering every facet of road traffic law you are likely to encounter, whatever the situation. Providing an unbeatable combination of in-depth analysis with a userfriendly format Wilkinson's explains the law, legal principles and procedure, showing both what the law is and how to proceed with prosecuting or defending a case.
Setting out the basic principles and clarifies key terms, it covers specific offences chapter-by-chapter ensuring relevant information is easy to find, and follows through to sentencing and appeals, covering every aspect in chronological order, so you're never at a loss for the answer you need. With a renowned and authoritative author team, led by Kevin McCormac, the book setsout the implications of legislative and case law developments, goes through typical and unusual situations and provides advice on the law relating to them and provides easy access to core statutory and related primary materials, with annotation to clarify complex areas, but that's not all…The work also gives full consideration of the Sentencing Guidelines Council's revised Magistrates' Court Sentencing Guidelines as regards each road traffic offence and covers the newly in force causing death by driving offences and the Sentencing Guidelines Council's definitive sentencing guideline applying to them.
Volume 1 sets out the definitions of road traffic law providing an explanation of the law and procedure both for prosecuting and defending a case. Specific offences are dealt with chapter by chapter. Volume 2 contains core statutory material, including statutes such as the Road Safety Act, SIS, E U Legislation and international agreements.

New to the 27th Edition

This compendium of boilerplate clauses in common use also features detailed analytical commentary on each clause, together with advice on its application. The book also takes account of recent case law where applicable and comes with a CD-rom containing all the clauses for ease of access to readers.
COVERAGE