To Members of the Malaysian Bar and pupils in chambers

The Siri Pemikiran Kritis ("SPK") is a flagship event organised by the Bar Council National Young Lawyers Committee ("NYLC") to promote intellectual discussions on civil liberties with a legal twist.

The forums commenced in 2007, and since then NYLC has organised more than 15 such forums. Every forum is designed to initiate critical and matured thinking that encourages responsible and measured debate and discussion amongst the speakers and the attendees.  The last forum, held in March 2012, discussed the then-proposed Race Relations Law.  It was well attended by Members of the Bar as well as the public at large.

NYLC invites Members and pupils in chambers to the second SPK forum for 2012.  Admission is free, and the details of the upcoming forum are as follows:

What is the purpose and intent of the alternative Bar?  Does Malaysia need a second Bar?  Should we have a law academy instead?

These are just some questions which will be discussed, and hopefully answered, at the forum.

Join us at the forum!  The forum is bound to be interesting, witty and engaging.  To maximise the broadcast, and to reach out to more Members and the public at large, this forum will be streamed live.

Please be informed that although this event is open to the public, pre-registration is required, as places are limited.  Kindly complete and return the attached registration form by fax to 03-2032 2043 or by email to janet@malaysianbar.org.my, by 22 June 2012 (Friday).

For enquiries, contact Janet Nathan by telephone at 03-2050 2103 or by email at janet@malaysianbar.org.my.

Many areas still require laws to provide protection against discrimination: physical and health disability; sexual orientation and gender identity; and race and religion.  Many existing laws and legal provisions require reform or complete abolition, relating to: freedom of expression; freedom of assembly; elections and constituency delineation; death penalty; torture and other forms of cruel and inhuman punishment; detention without trial in relation to dangerous drugs; and ouster clauses, to name but a few.  These include some that have only recently been approved or brought into effect: Peaceful Assembly Act 2012; Security Offences (Special Measures) Act 2012; and Evidence (Amendment) (No. 2) Act 2012.

We call on the Government to exhibit stronger courage and greater ambition when it comes to the area of law reform, including the setting up of a truly independent Law Reform Commission.  In this regard the Malaysian Bar shares and supports the Honourable Prime Minister in his aspiration for a Malaysia that practises an inclusive and functional democracy.  The Malaysian Bar urges him to soldier on with law reform despite criticisms from others that such reforms would lead to anarchy.  That which we value most dearly cannot be obtained so easily.
We also agree with the Honourable Prime Minister that our laws should be human rights-friendly.  Indeed, they should reflect international norms and standards that have been recognised by the nations of the world, regardless of political persuasion and religious heritage. Malaysians and those living within our borders deserve nothing less.
An inclusive and functional democracy befitting the nation's goals of Vision 2020 and a modern and progressive country require a deep-seated and well-developed respect for the rule of law.  The Malaysian Bar stands ever-ready and always-prepared to continue to work with the Government in all aspects of law reform, and to ensure that all outdated legislation are removed from the statute books.

Innovation- A Paradigm Shift For SMEs 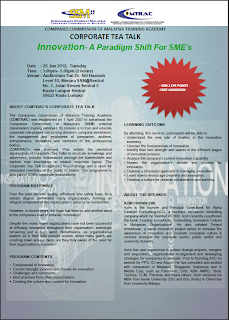 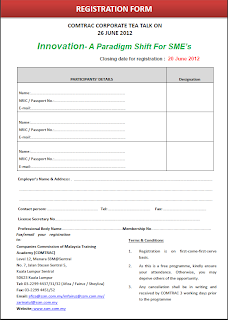 WARNING!: This message and attachments are intended for the recipient(s) only. The information contained is privileged and/or confidential and intended for the person(s) named only. Any use, review, disclosure or copying of the contents is hereby strictly prohibited. If this email has been received in error, kindly notify the sender via email and delete this message and its attachment accordingly. Except where the email is sent in the usual course of business, any views expressed in this message are those of the individual sender unless expressly stated as being that of the Companies Commission of Malaysia. The Companies Commission of Malaysia cannot ensure that the integrity of this communication has been maintained or that it is free of errors, viruses, interception and / or interference. The Companies Commission of Malaysia is not liable whatsoever for loss or damage resulting from the opening of this message and/or attachments and/or the use of the information contained in this message and / or attachments. 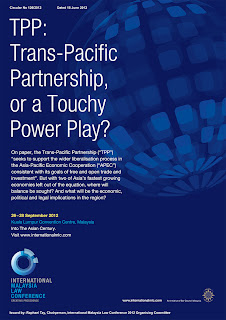 International Malaysia Law Conference ("IMLC") 2012 will be held at the Kuala Lumpur Convention Centre from 26 to 28 Sept 2012.

A group discount of 10% is available when five or more lawyers from the same law firm register simultaneously for IMLC 2012.

For more information on IMLC 2012:

(a) View the programme highlights here;
(b) Click here for the registration form; and
(c)  Click here to view a video on IMLC 2012.