Malaysia-Talk on 'Guardianship Of Infants Act 1961'

Talk on 'Guardianship Of Infants Act 1961' 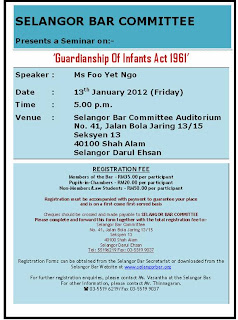 This message has been scanned by TM antivirus for viruses and spyware and found to be clean.

A RESTATEMENT OF THE EXISTING LAWS: WINDING-UP/BANKRUPTCY PROCEEDINGS ARE NOT EXECUTION PROCEEDINGS

"...[9] It was also argued before the High Court, and on appeal before us, that when the winding up petition was filed there was an ad interim stay of the order in place. This ad interim order of 14 November 2005 however had not been held out and disclosed as an exhibit by the company.
[10] On this issue we are of the view that the learned High Court was right in ruling that, even if there was an ad interim order in place, there was no legal impediment for the petitioner to file a winding up petition against the company. An ad interim stay does not mean that a winding up petition cannot be filed as bankruptcy and winding up proceedings was not within the ambit and meaning of 'execution' proceedings as provided by O 46 r 1 of the Rules of High Court 1980 which states as follows:
In this Order, unless the context otherwise requires, 'writ of execution' includes a writ of seizure and sale, a writ of possession and a writ of delivery.

[11] In Perwira Affin Bank Bhd v Lim Ah Hee @ Sim Ah Hee [2004] 3 MLJ 253 at p 265 Abdul Hamid Mohamad FCJ (as he then was) in delivering the decision of the Federal Court held that a bankruptcy proceeding is not a writ of execution, which was a continuation of the existing proceeding to enforce the judgment provided by the same rules of court, ie the Rules of the High Court. Bankruptcy proceedings are provided by separate law and rules, the focus being the judgment debtor, not the debt, and the object being to appoint a receiver in the person of the official assignee over the assets of the debtor and to convert the status of the debtor into a bankrupt with the loss of control over his properties
to the official assignee. The fact that it is based on a judgment does not necessarily make it a continuation of the existing proceedings. It is a proceeding by way of petition just like divorce, winding up or election to name a few, bears the characteristics of a fresh proceeding unlike an execution proceeding. This principle is equally applicable to winding up proceedings.
[12] In Re A Company [1915] 1 Ch 520, the question before the Court of Appeal was whether the execution on a judgment included the petition of winding up of a company. Lord Cozens-Hardy MR said at p 525:
... Now 'execution on the judgment' is a technical term. It is a legal process by which the judgment creditor, in that character and for his sole benefit, by a proceeding in the same action seeks to satisfy his judgment wholly or partially. I think it is plain that a winding up petition is not execution on a judgment. It lacks almost every element of such an execution...."
at December 24, 2011

A RESTATEMENT OF THE EXISTING LAWS: WINDING-UP PROCEEDINGS-THE NON-FILING OF AN AFFIDAVIT IN OPPOSITION IS FATAL

"...[8] On the technical point raised of non compliance by the company of r 30(1)of the Companies (Winding-Up) Rules 1972 of failing to file an affidavit in opposition to the petition, we agree with the submission of counsel for the petitioner that the failure to do so was fatal. See Crocuses & Daffodils (M) Sdn Bhd v Development & Commercial Bank Bhd [1997] 2 MLJ 756 where Siti Norma JCA (as she then was), r 30(1) to be mandatory. Rule 30(1) states as follows:

Affidavits in opposition to a petition that a company may be wound up shall be filed and a copy thereof served on the petitioner or his solicitor at least seven days before the time appointed for the hearing of the petition...."
at December 24, 2011